On a Sunday ride to Incheon, one of our favorite spots, we discovered yet another trail that had been completed. The Ocheon trail connects the Saejae and Geumgang trails, one more step toward the bicycling network through the entire country.

Off we went the following weekend to ride the Ocheon trail. We decided begin our ride in Chungju. This would allow us to revisit Suanbo, a spa town where we spent a night during the Incheon - Busan ride.

The ride in the valley was as beautiful as we remembered it. About halfway from Chungju to Suanbo, we stopped at a pretty, shaded cluster of buildings along the river. We remembered it from our Incheon - Busan trip. A river-front restaurant looked appealing but we had a packed-lunch which we planned to eat by the waterfall a few kms further. Suddenly we heard the restaurant owner calling us, inviting us to coffee. Even though we weren't in the mood for coffee, we appreciated the hospitality and sat down at a table. He then told us he remembered us from our trip the year before. When we were getting ready to go he told us to go in the kitchen and fill up our water bottles with ice cold water. Korean hospitality at its best. Gestures like this have made our stay in Korea memorable. 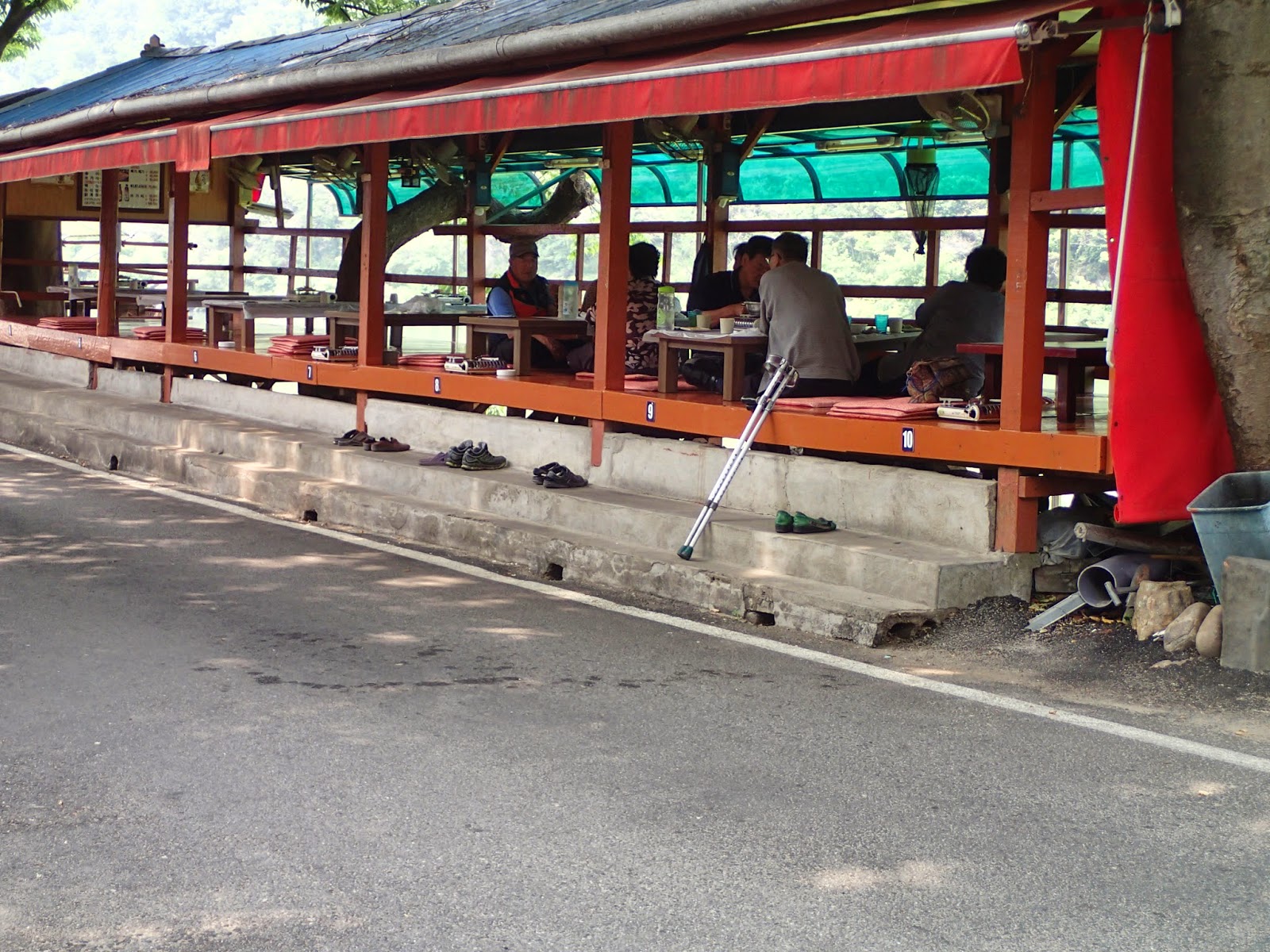 The first hour was uphill on the Saejae trail after which we branched off to join the Ocheon starting point in Yeonpungmyeon (연풍면). The newly constructed trails were a joy. We rode some distance with a large organized group. Chatting and not paying attention, we all ran into the dead-end of an almost complete segment. 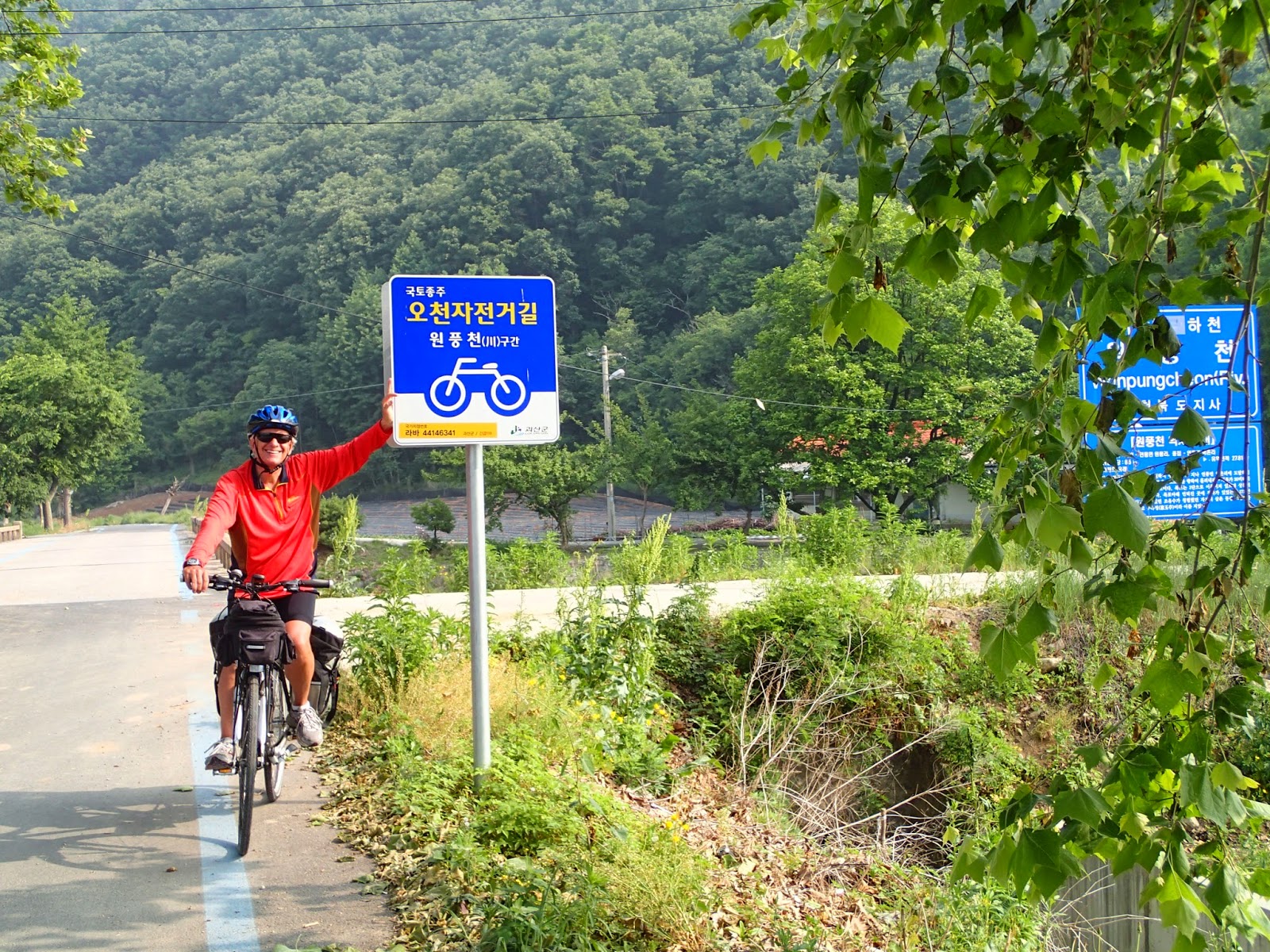 Today's path took us through rice farming areas. Mountains on one side and rice paddies on the other made for a nice cool ride.

Even though it was early in the day, we stopped in Cheungpyeong because the next town with accomodation options was a bit far. Besides, it was still only Saturday. While getting our stamps in Cheungpyeong, a cyclist told us about the Seomjingang trail being completed. He told us it was one of the most beautiful rides. It was an exciting prospect even though we were running up against the clock for our return to the US.

We checked into a motel, showered and set out in search of a late lunch. Paris Baguette is a popular bakery/coffee shop in Korea and likely to be present in most major towns. In an unfamiliar town, I would usually ask school girls where to find one. It was a good trick because they always knew! So lunch was a Paris Baguette sandwich where we also picked up breakfast.

The day being Sunday, we rain into many cyclists, adults and children as well. We arrived at the final stamp station around 1pm. As we celebrated the final stamp over lunch, we were joined by a local cyclist who was out for the day. Being aware that one can get to Seoul from any corner of Korea, we had not put much planning into the bus ride home. The cyclist told us to cycle back along the Ocheon trail to Cheongju city, about 30Km. He ate his candy bar, said goodbye and took off. As we relaxed, packed up and got ready to leave, we saw him coming back for us, cycling at a wicked pace. It seems when he was halfway home, he realized that the Sejong bus station would be much closer and save us 20+Km of riding. He had turned around and come back to update us!

We found our way to Sejong and stopped to ask where the bus station was. The men said, 'You're standing in front of it.'!