The Yeongsangang bicycle tour is relatively short, official distance being 129Km. Damyang (담양), the town near the starting point, is famous for bamboo. One can find every bamboo product, cups, flutes, liquor and even ice cream. The ride ends in the port city of Mokpo. This was convenient as we planned to hop on a ferry to Jeju island from Mokpo.

On this trip we enjoyed the company of our German friends Christine and Ekkehart. We all met the preceding week to buy bus tickets as we were traveling during a Korean holiday weekend. That was a good decision because the bus and more importantly, the cargo space were packed.

Our rendezvous on the way to Seoul bus station was near the Noksapyeong subway stop in Itaewon. When we arrived at the bus departure gate, we noticed many large sacks, ready to be loaded. In addition, there were two more cyclists. We became a little nervous because there was no way all that would fit in the cargo hold. The reservations were for seats only and the ticketing personnel did not pay attention to our mention of 4 bicycles. We need not have worried, the sacks were destined for a different city and even though the cyclists were going to Damyang, they were on a later bus. 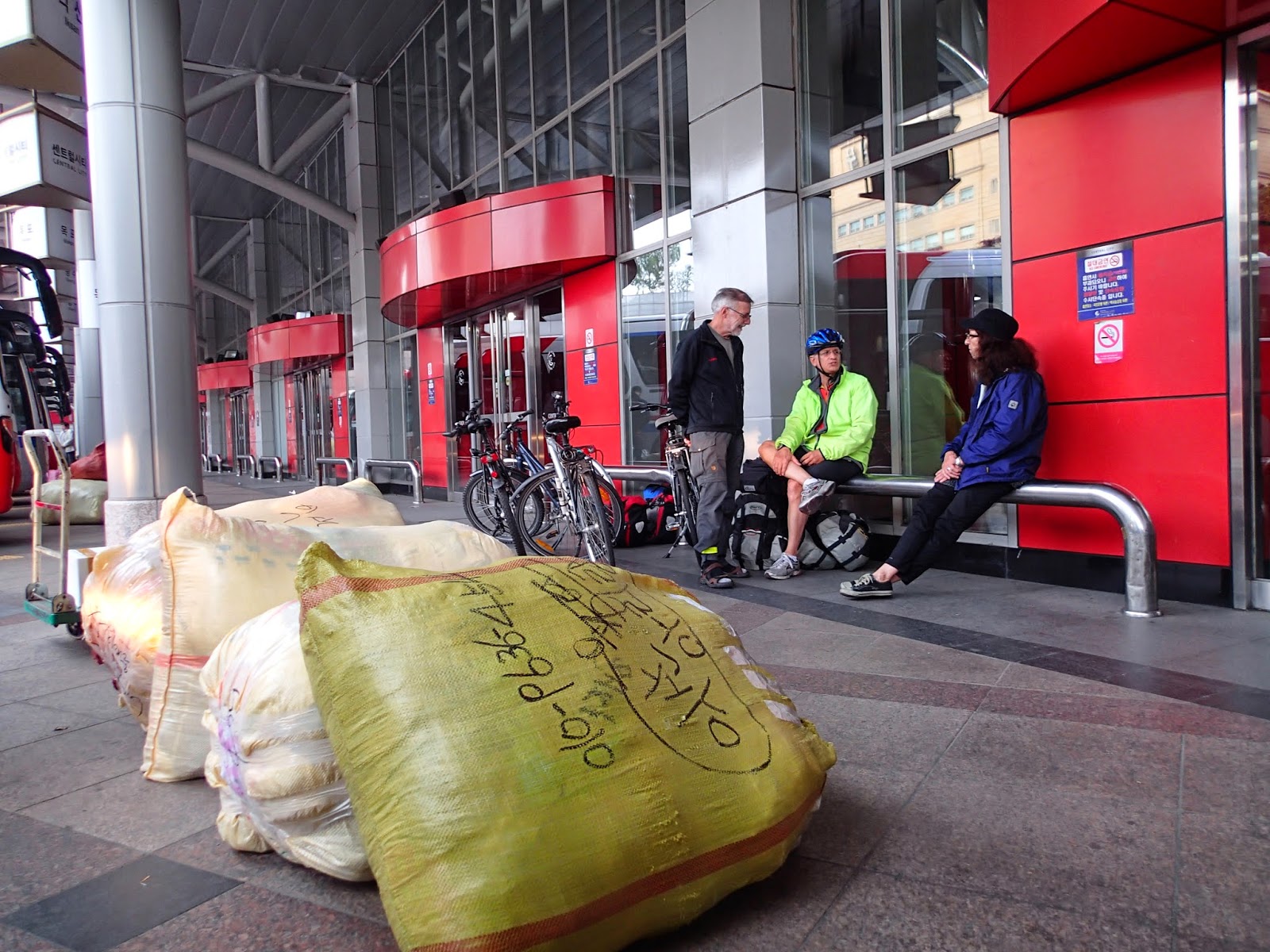 From the Damyang bus terminal we headed for the starting point, Damyang Dam (담양댐). Detouring to the hotel I had looked up in Seoul, we checked out the rooms and booked i.e., paid for them. I had tried to make a reservation from Seoul but the proprietor wanted a bank transfer, something we did not want to do.

The town was pleasant and the markets were bustling, we had many photo ops even before hitting the bike trail. Our first stamp in hand, we had lunch and toured the dam which was another mile from the stamp station. On the way back, at the Meta Sequoia forest, we ran in to the cyclists who caught the later bus from Seoul. We chatted like old friends and took photos together.

Back at the hotel, we showered and headed for the famous bamboo forest. It was pleasant to walk in between dense bamboos. A steady stream of visitors seem to be coming through even at the late hour. In the souvenir shop we tasted bamboo ice cream and picked up a few souvenirs. Fortunately bamboo is light. Dinner was green onion pancacke (파전) at a riverside restaurant. 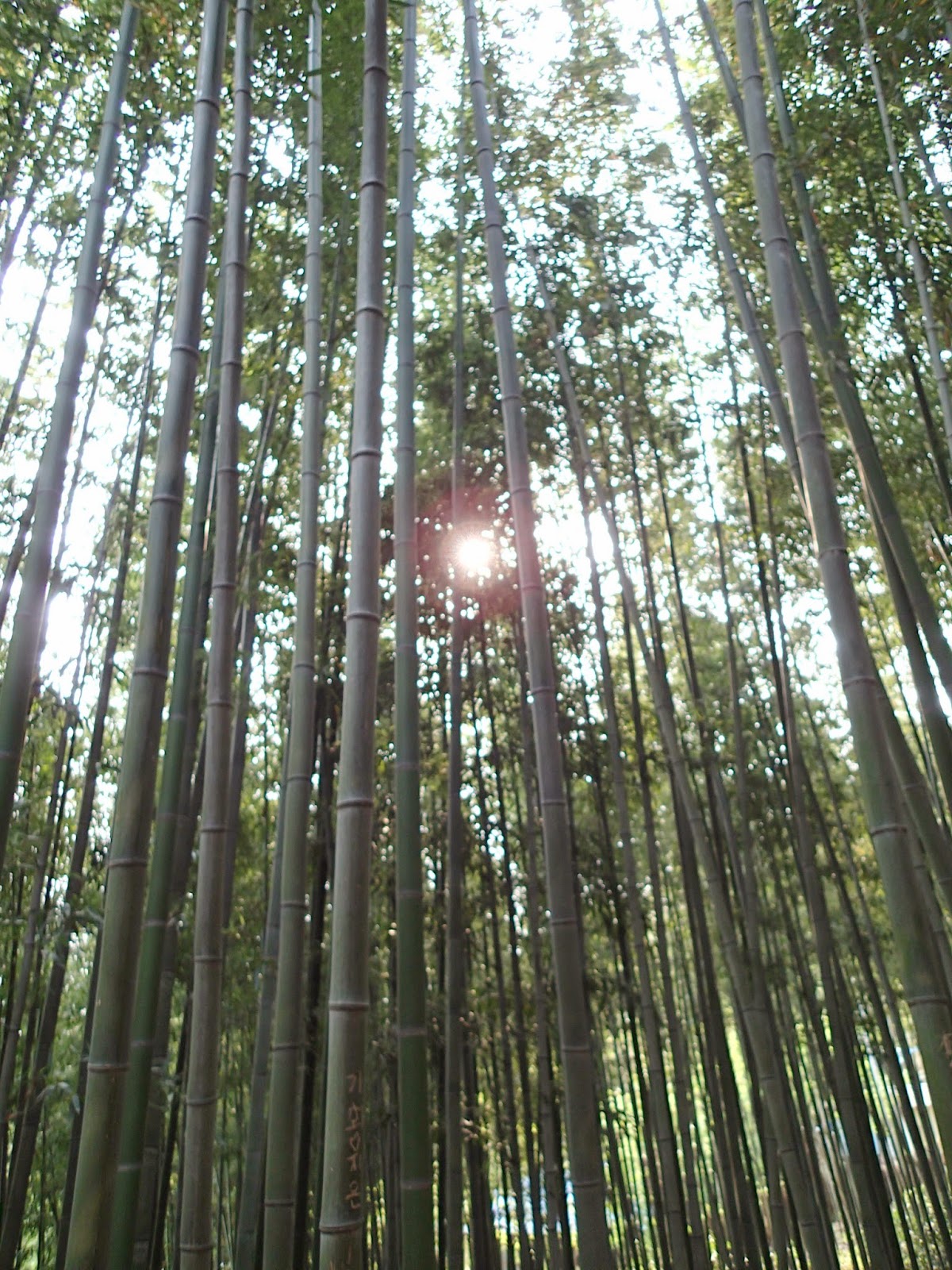 Today's ride took us through the city of Gwangju that has many historical points of interest. One of them was the May 18 National Cemetery which honors victims of the democracy movement in 1980.

Below is a collection of photos; a group of teenagers cooking lunch on a portable stove, along the bike trail (Left), our funky hotel room in Naju (Center) and sailboat shaped toilets, also in Naju (Right).

At the stamp station of Chugsanbo (죽산보), we took a break. A river patrol man joined us and chatted about rock-and-roll, basket ball and football (soccer). He rattled off names of teams and rock groups. He told us about a movie studio a few kilometers down the bike route. This 'studio' is called the Naju Image Theme Park (나주영상테마파크) and  is an entire traditional Korean village, situated dramatically on a hill. We decided to cycle up the hill and tour the studio. The set was vast and the buildings seemed fully equipped as if ready for filming at a moment's notice.

The rest of the ride was pleasant, wind picking up in the afternoon. We were finished with the final stamp around 4pm and began contemplating accommodation options. As Jerry and I were hoping to catch an early morning ferry to Jeju, we decided to stay in a motel near the ferry terminal. Our friends were okay with this as they had no fixed plans for the following day. 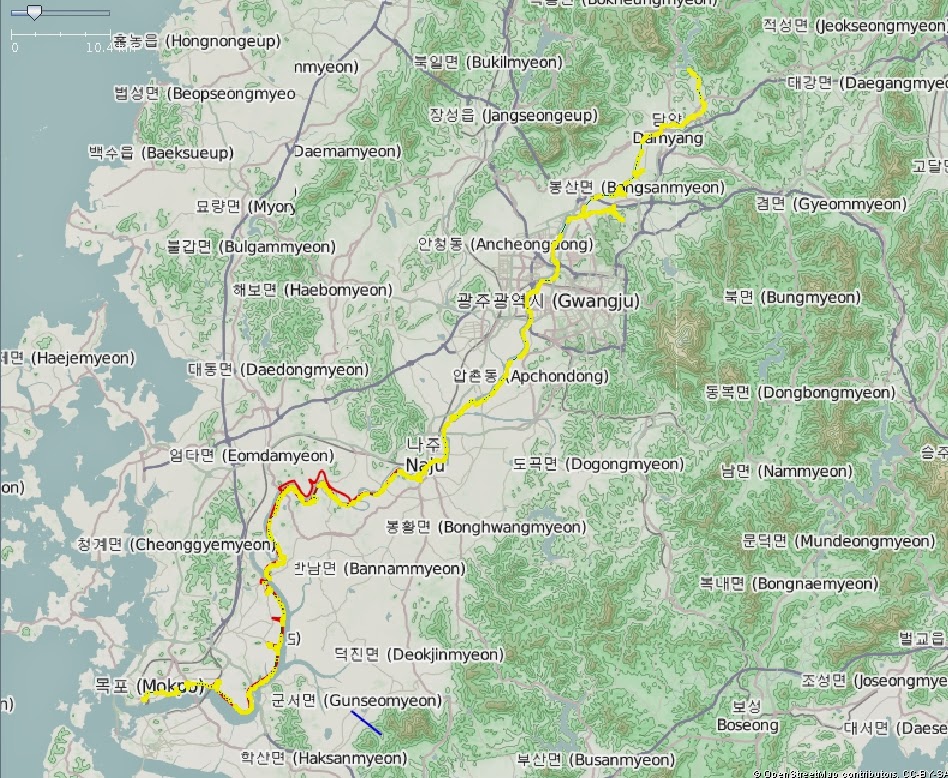