The Seomjin river trail had been completed very recently, we heard about it from a cyclist on the Geumgang trail. On a day trip to Incheon we confirmed it at the Four Rivers trail office. The woman at the office added the Seomjingang page to our bicycle passports. We bought a map of all the trails, now including the newest one.

The starting point was the Seomjingang dam. After the bus ride from Seoul, we wanted to overnight in a town close to the it for an early start the next morning. The best option turned out to be Sunchang. Even though Sunchang is actually quite far from the dam but from there we could cycle to the dam on the bicycle trail and not busy roads. However, this meant that we would cycle up the trail to the dam and back to Suncheon the same way.

We arrived in Sunchang early afternoon by bus. We took our time looking for a motel and checked into one in town. Shortly after, we set out to find out where to begin the next morning. The access to the river was on a nice country road, 6km from town.

The trail began along rice farms but was soon flanked by spectacular mountains. With small, nestled settlements and the Hyeonsu bridge (현수교) which reminded us of the Hillary bridge, we both had flashbacks of Nepal. 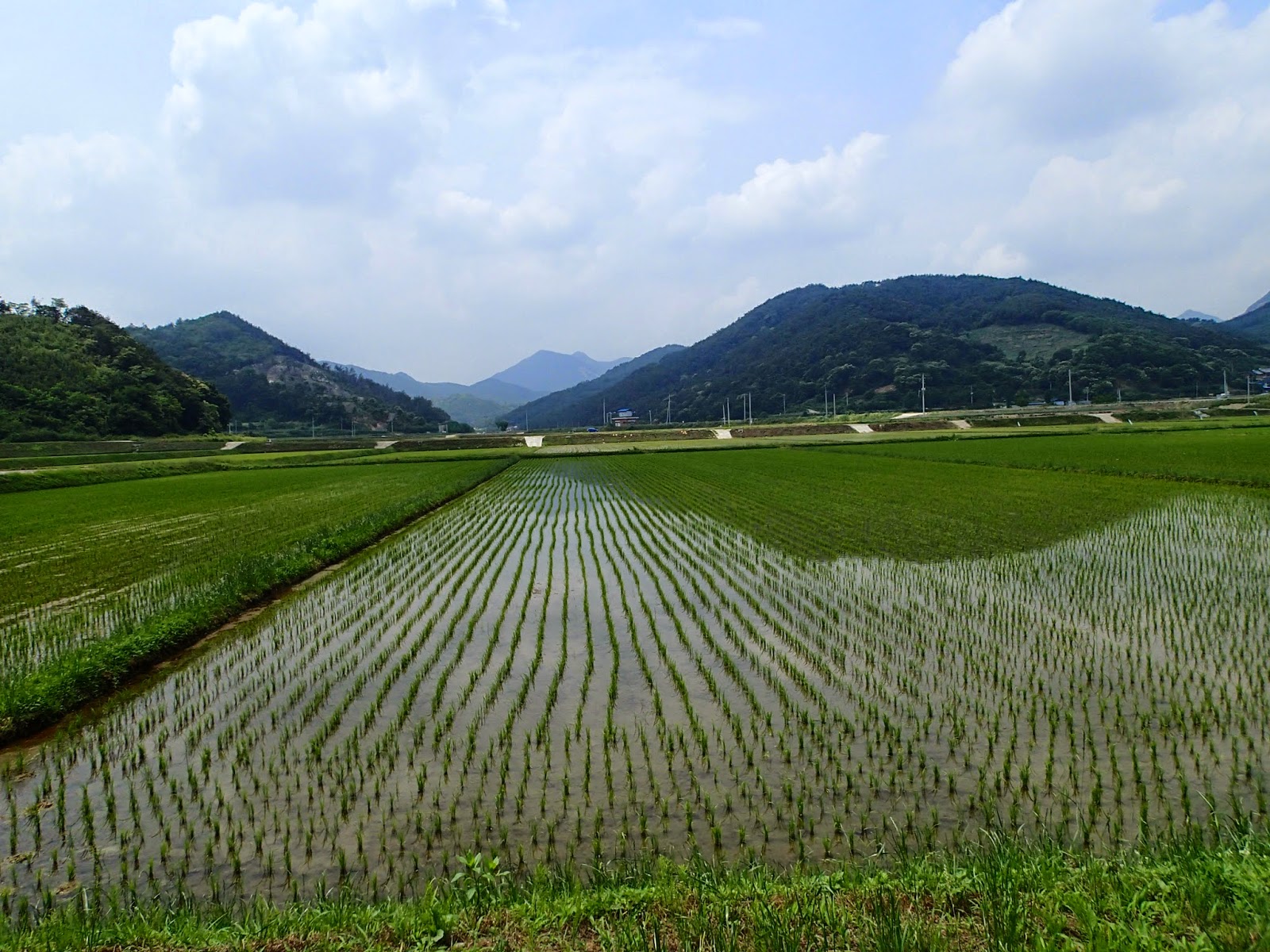 The day's ride brought us along Jirisan national park. There were many outdoor activities' businesses and a tourist steam train. We had read that it was actually a diesel train built like a stream train.

All along we saw small, green apricots (매실) being harvested. Apricot tea is delicious and served cold. I had enjoyed it on a few occasions but had not known the little green fruit to be the source.

The destination for the day was Gurye but when we arrived there, it was still early, 2pm. We decided to cycle another 20km to the next township. The decision was a fortuitous one, Hwagae was a charming little town with a traditional market, 화개장터. Green apricots were everywhere, preserved in jard and as tea. The market also featured pottery, farming tools and of course, food.

The motel was nothing special but the friendly owners made up for it. We checked in and quickly went out to explore the market. Dinner was in a waterfront restaurant, the meager portions did not match the high price.

Fog draped over the valley but burned off mid-morning. The ride was gorgeous even with increased developement. Seomjingang got wider as we neared the mouth of the river. The final stamp station is in a nice park with awesome views of the waterway and mountains. Right next to the phone booth is a map with routes to the Gwangyang bus station. We stamped the passports and cycled another 18km to the bus station. After buying tickets, we had a late lunch and boarded the bus for home in time for a home-cooked meal. 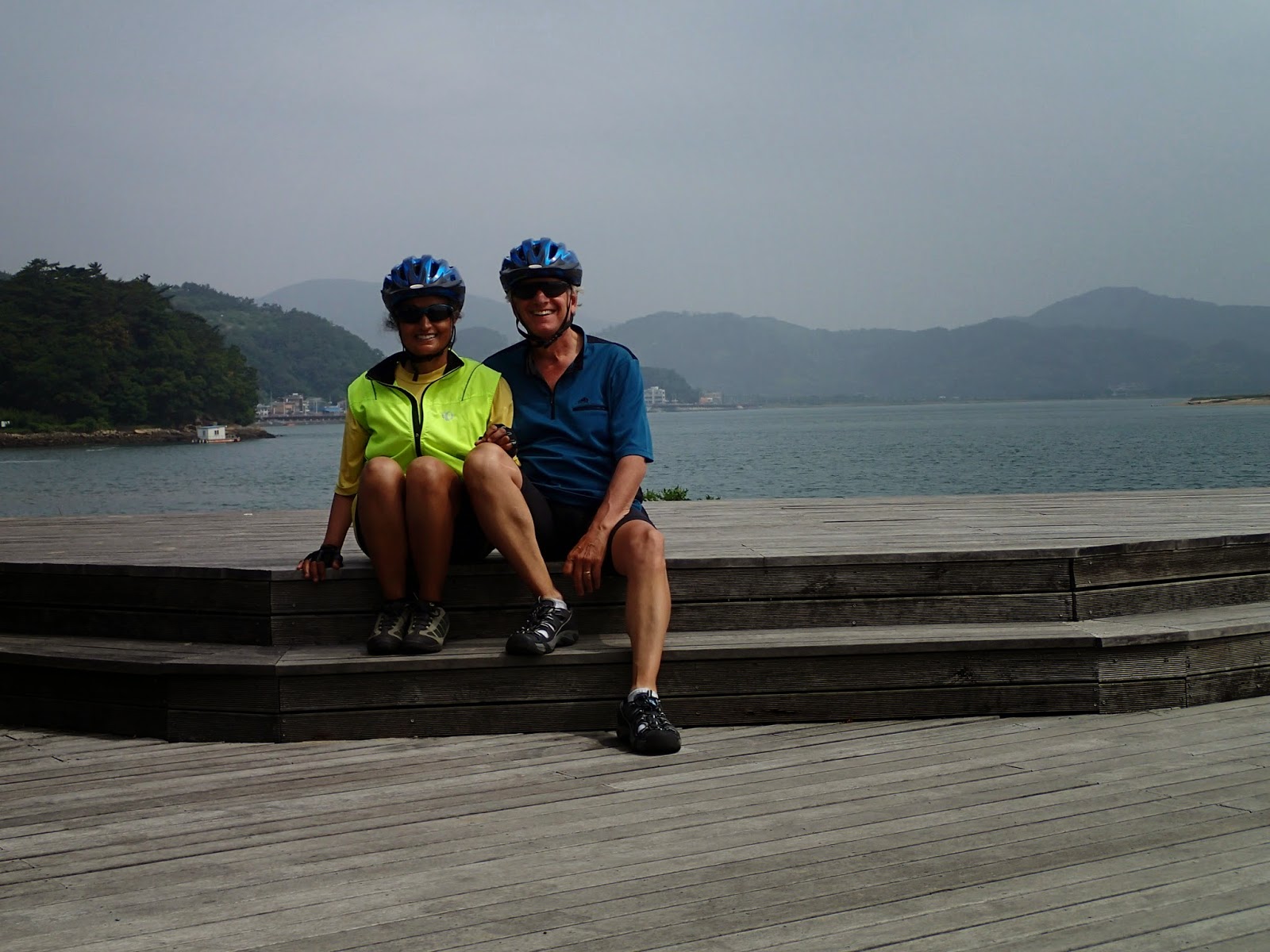 Here is a map of our favorite trail on mainland Korea. 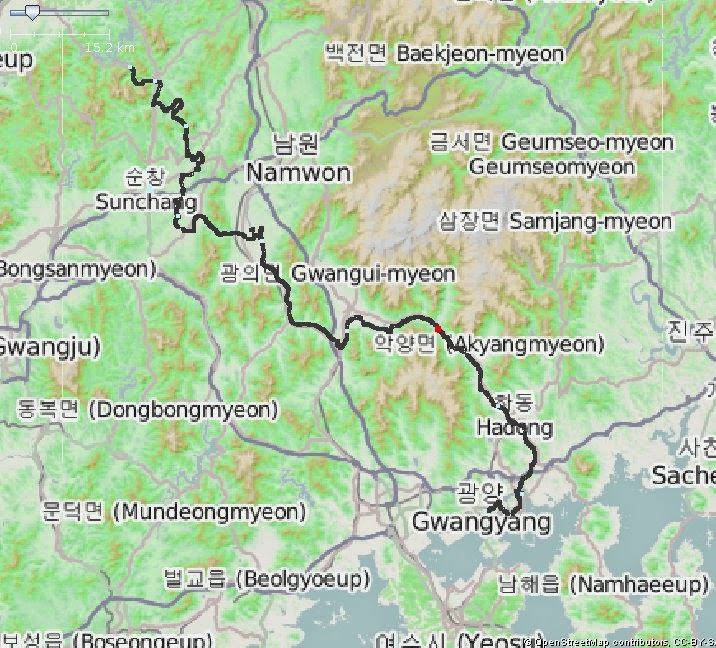