You cannot take a bad picture in Jeju.

Just when I thought Korea could not get any more beautiful, we landed on Jeju. Even as we waited in the ferry terminal in Mokpo, a fellow passenger began to extol the stunning natural beauty of Jeju. The Korean man had spent time in the U.S. and seemed to enjoy chatting with us in English. We spent almost the entire ferry ride with him and received a long list of must-do's before disembarking.

Once in Jeju City we dropped our original plan of spending a night in the city. The bustle of afternoon traffic had us yearning for a calmer place. With the entire afternoon before us, we decided to begin cycling out of the city. Pizza serving as fuel, we headed west to travel the island in the counter clockwise direction.

By the time we were out of Jeju City, it was already 3pm. Hallim, the next township at around 40km seemed a good stop for the night.

Progress was slow not because of traffic or fatigue but because of countless stops for picture taking. One such photo op was a statue of the iconic Haenyo women. The Haenyo are female divers on Jeju who dive without breathing apparatus in search of fruits of the sea. These women begin at a very young age and some dive into their eighties. They generate an income from the sale of rare delicacies such as abalone and sea squirt. 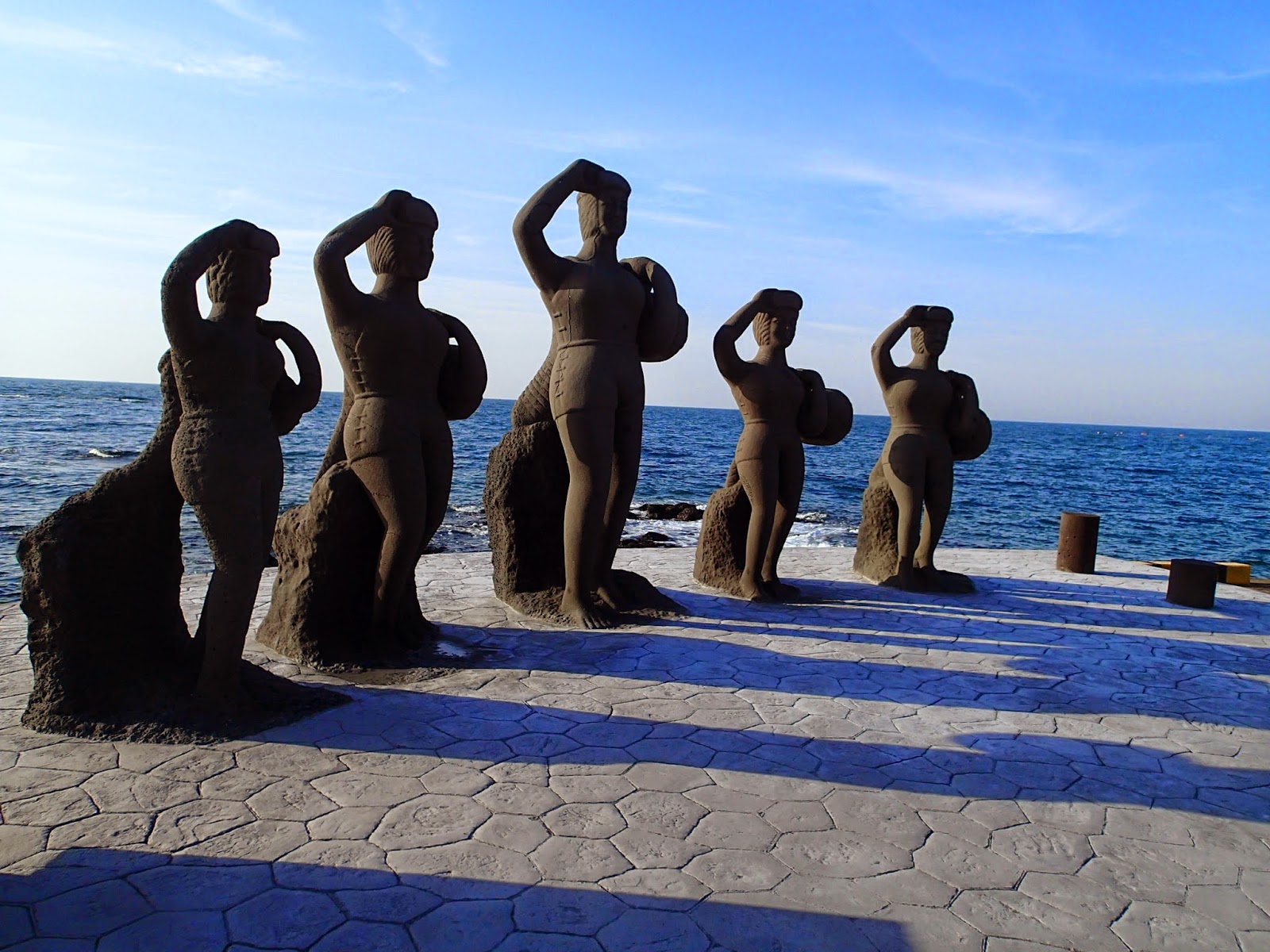 We kept snapping photos of the coastline, lighthouses, fishing boats and drying garlic occupying the bike trail every now and then.

Hallim was a pleasant town with many accommodation options. We looked around but decided to cycle a little further to Hyeopjae Beach. There we found 꿈의바다, pronounced Kumipada, a charming guest house right on the beach. The place was empty, the owner showed me a few rooms and to further entice me, offered a $10 discount on the waterfront suite. It was a happy ending to a wonderful day. After showering, we walked around town, picked up our breakfast. Mountain House spaghetti was dinner in the dining room with a view.

Coffee on the deck of the guesthouse was a great way to start the morning. Clear blue skies promised another good day of cycling. Finding small roads which hugged the coast became fun. The western part of the island was less developed and except for an occasional farm truck or car, there was little traffic.

Every so often we would see squid strung out on clotheslines drying in the sun. Dried squid is a popular snack we often see in the markets.
Further along we saw a 'point of interest' sign pointing to Suwolbong (수월봉) geopark. A gazebo at water's edge seemed to be the perfect place to park the bicycles. We walked down the steps and along the volcanic rock face. The cross section showed the various layers of molten lava which forms the rock.

Further along, in the middle of nowhere was a sign pointing to a coffee shop, '500 meters up the road', perfect for a mid morning stop. We cycled up the half km to find it, 노을과 어울림 무인카페.  We walked in and were greeted by the aroma of fresh brewed coffee. But there was no one in the place. The interior was highly unusual with post-it notes covering up most of the wooden walls and columns. Several different kinds of brewed coffee were being kept warm in the pots. After reading the signs 'here's the coffee, 'here are the mugs' we realized that it was a self service coffee shop. Trying to find where to drop the money, we found a house shaped wooden box marked, 머니 하우스 which is the transliteration of 'money house'! The house was the money box and we and we paid for our purchases. Sitting on the rocks along the ocean with a cup of coffee and a piece of cake, the coffee break was the best ever. P.S: The dictionary told us later that 무인 means unattended i.e., self-service! And the post-its were notes left by visitors.

We thought the day could not get any better but it did. The Haenyo were hard at work and I was able to hop down on to the rocks and see them up close. That made my day.

The approach to the coastal town of Hamo-ri, a long down-hill rewarded us with dramatic views of the coastline and Songaksan in the distance. We stopped in Sagye for more photos. Right on the waterfront was a statue of two Haenyo women talking to Mrs. Gorbachev to commemorate the Gorbachevs' visit in 1991. On the other side of the street were sheds with floats and baskets used by the Haenyo. Turning the corner, Sanbanggulsa temple (산방굴사) came into view perched up on the side of Sanbangsan (산방산) mountain with a huge statue of Buddha visible from some distance. Buddha's birthday was the day before(5 May) but worshipers seemed to still be celebrating, temple premises were packed.

We had thought about staying in Jungmun but when we arrived there it was only 1pm. Besides Jungmun felt very commercial, dotted with many resort hotels. So the new destination was Seogwipo. We rode up and down hills and along onion farms.

At one point the coastal road became more major and veered more inland. With our preference for coastal views, we picked a small road along the coast but Google maps showed a dead end. We asked some local teenagers if there was a way to ride the bikes along the narrow road. The girl was hesitant but said it was possible and we set off. It was going well until there was a body of water and the road stopped. On either side of the water, concrete steps went down to a tiny harbor. Walking loaded bikes down steps would be uncomfortable so we went in search of another way. Riding around and between farm houses, we came across a ramp which took us to the far side of the harbor. In essence we came up with a path where there was none. 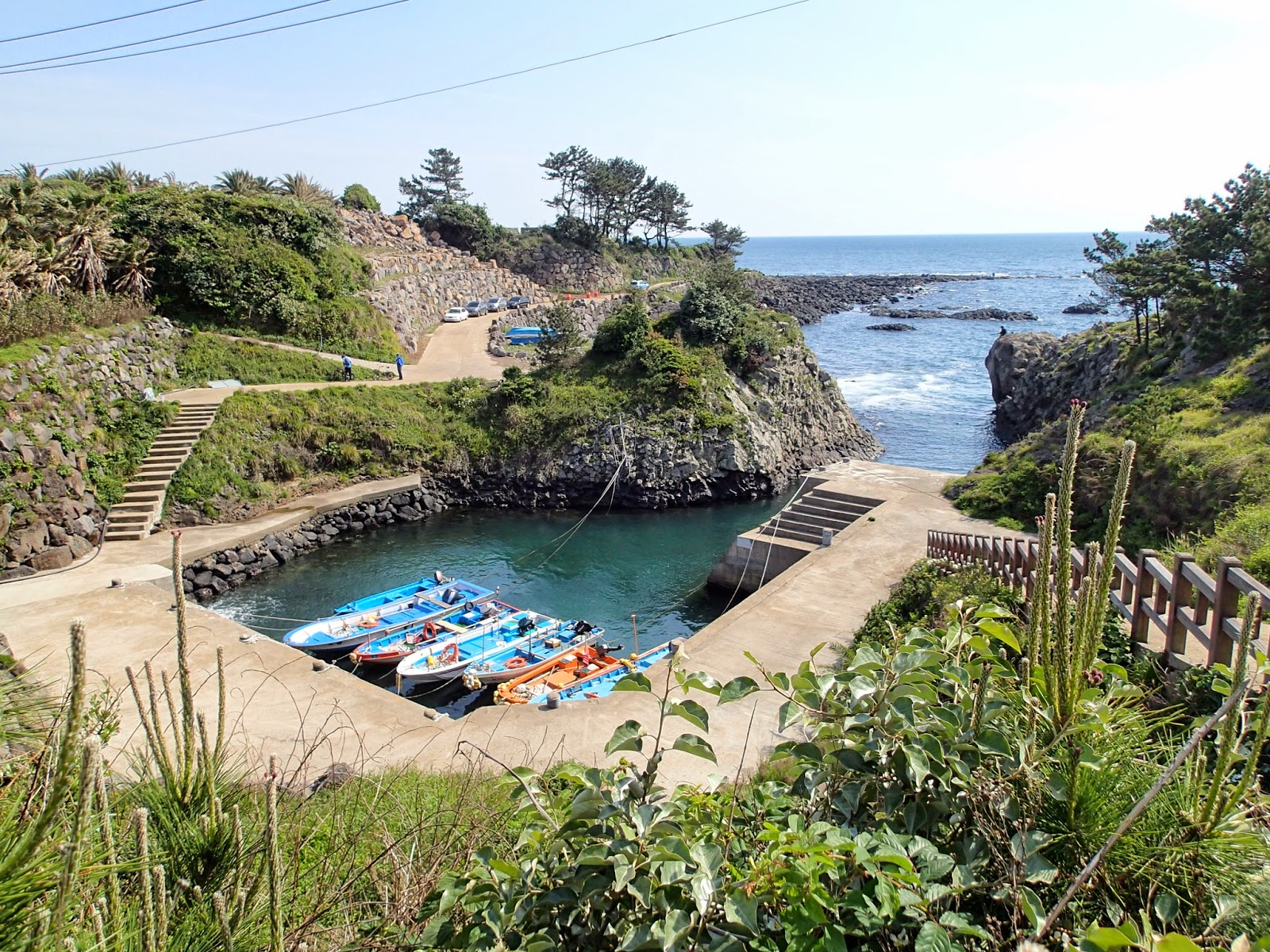 Seogwipo is a medium sized city, more or less in the middle of the southern coast, with many hotels. We cycled around till we found one we liked. Milano Hotel turned out to be a good choice with a pleasant decor and a view from the room. They insisted we park the bicycles in the lobby even though we were worried about scratching the gorgeous tile floor. Dinner was green onion pancake (파전), it was so good that we ordered a second one. 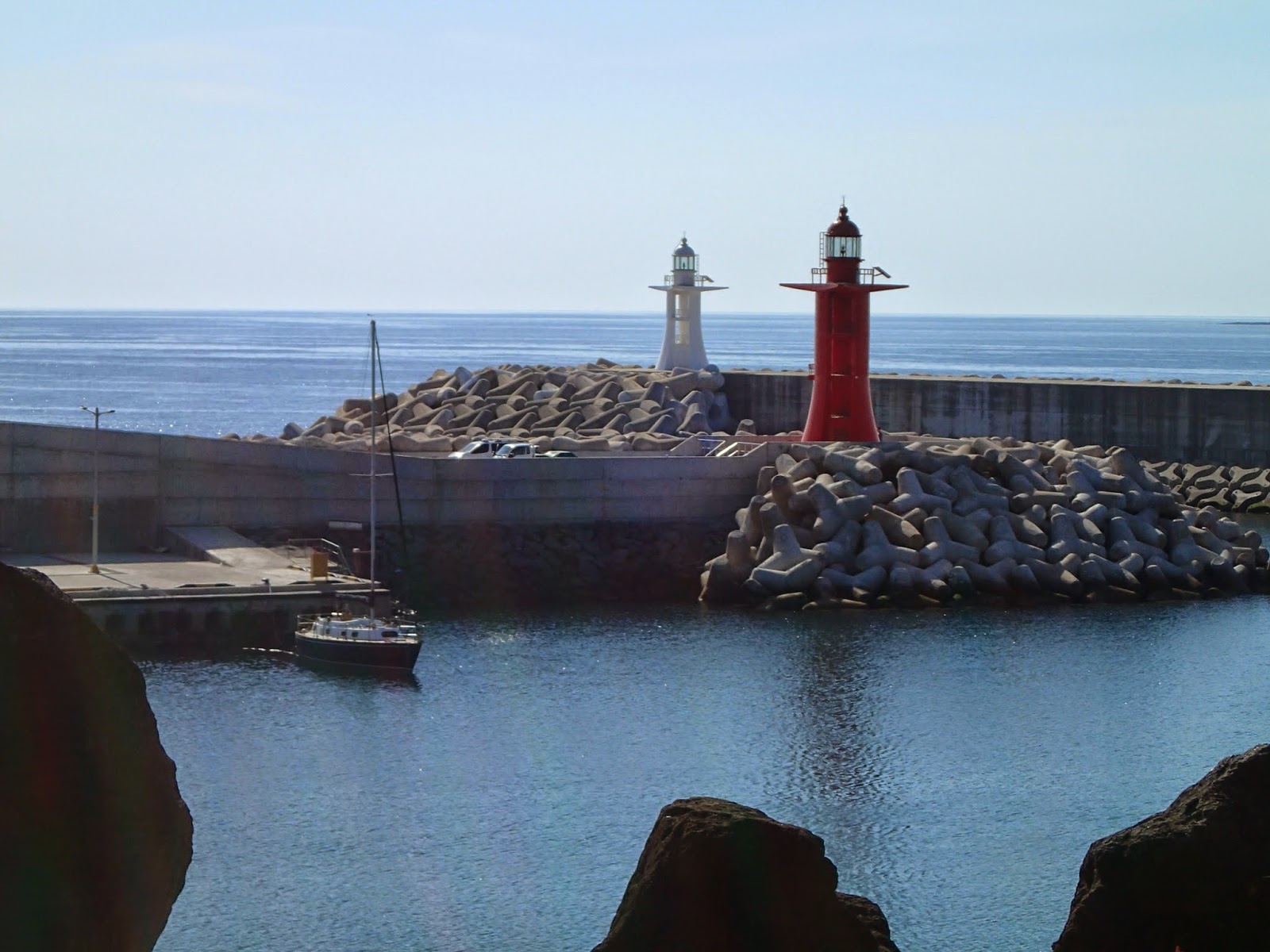 Our destination was the easternmost town Seongsan which is famous for the sunrise peak Seongsan Ilchulbong (성산일출봉). As we approached Seongsan we began seeing the distinctive volcanic cone from a long way. Hikes to the sunrise peak are very popular but our goal for the following morning was the ferry to the small island Udo. After checking into a hotel in Seongsan we set out in search of the ferry terminal. Since ferries depart every half an hour we did not by tickets. On the way back we popped into the coffee shop Cafe Coji. The interior was welcoming, we picked up bread for the next day and stayed for cappuccinos.

Upon landing on Udo, one notices that all manner of vehicles to ride around the island are available for rent, Hello Kitty scooters were particularly cute. The ride along the coastal road around Udo is15km, except near the ferry terminal we had the road all to ourselves.

After cycling around Udo and back on Jeju, the ride continued to be pleasant and views spectacular. All along, the Haenyo were a prominent theme with murals such as the one below. This young artist was in the midst of painting the divers and was happy to let us take her photo. 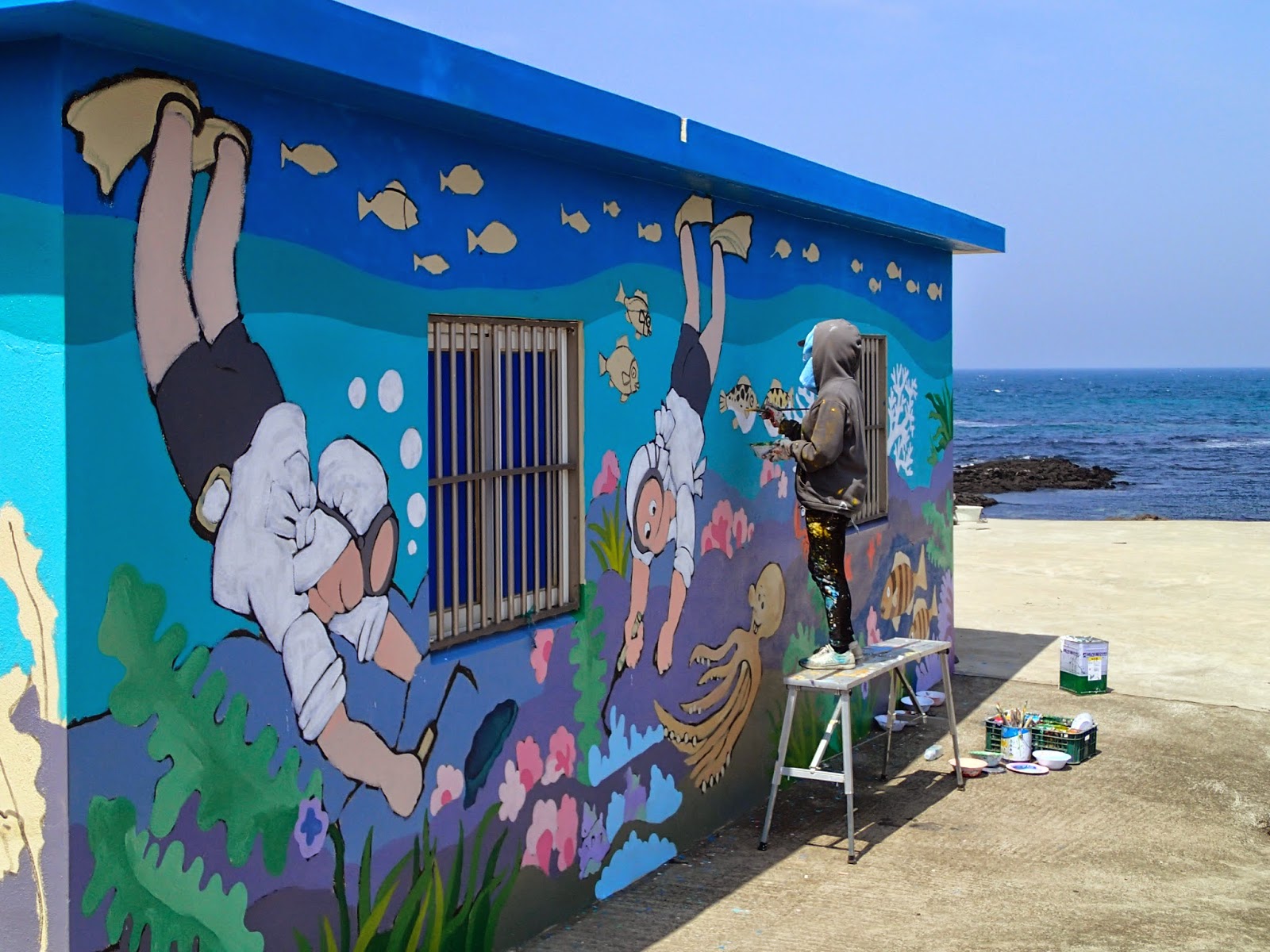 Some miles further we chatted with a young Korean woman, a triathlete who had applied and had been selected to live with the Haenyo for a year and learn free-diving and their way of life. She was thrilled at the opportunity and spoke to us with great enthusiasm. The Korean government is doing much to preserve the Haenyo culture which is in danger of fading into oblivion. Later in the day, we searched out the Haenyo museum in the town of Gujwa-eup.

We rode another 20km with a lot of head wind and stopped in the town of Jocheon-eup. The ocean front hotel had nice views even if it was a bit over priced. This was the second time we stayed in a 'tourist' class hotel, a big price tag but sorely lacking in standard amenities.

The approach to Jeju city was a long downhill with views of the harbor in the distance. We continued to hug the coastline, making a lot of unintentional detours. With nice weather and turquoise waters before us, we weren't complaining. This was also a way to prolong the day, discovering hidden gems such as this Haesinsa temple. 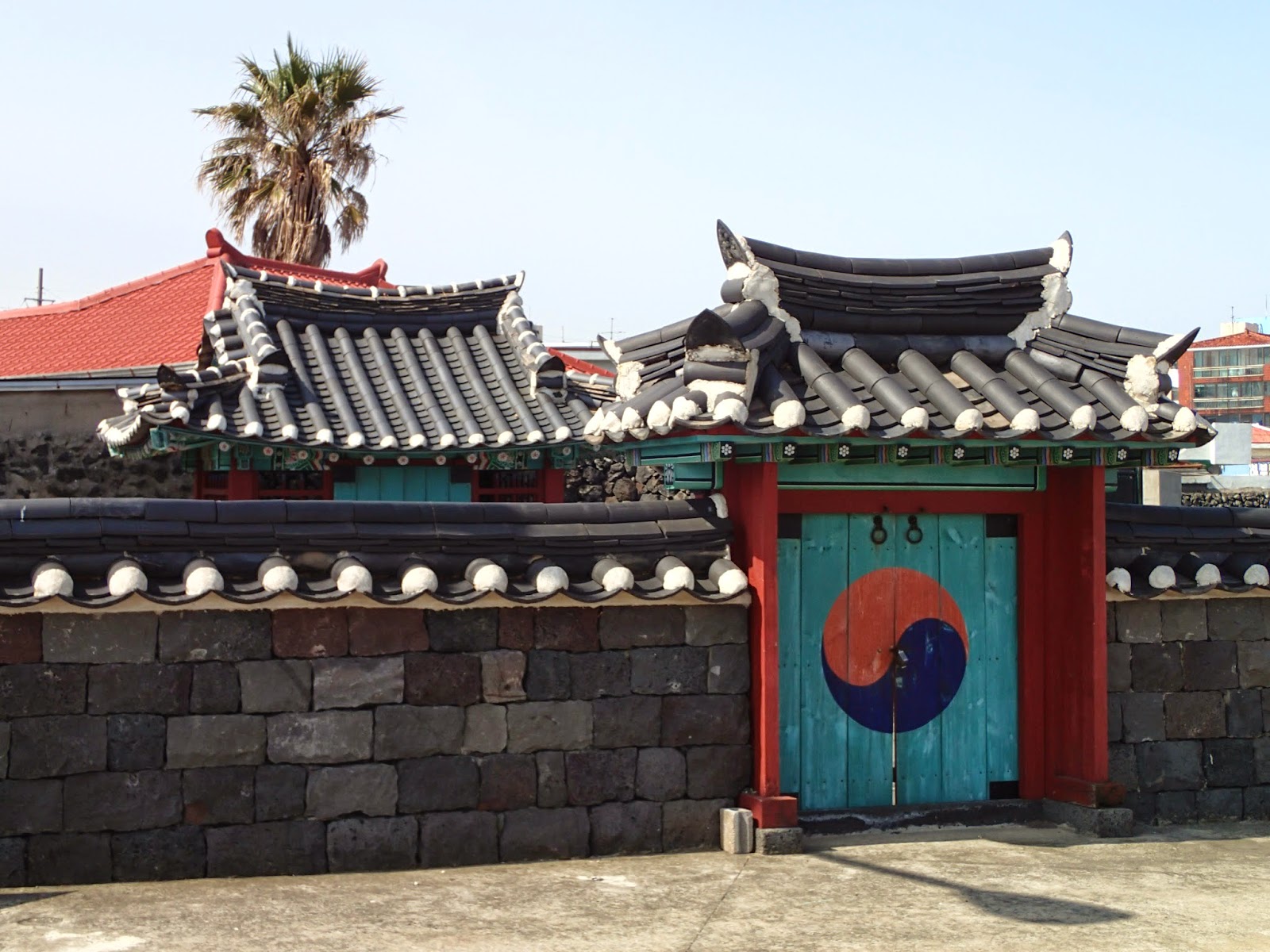 Completing the circuit and now back in Jeju City, we stopped in at the ferry terminal and inquired about the ferry schedule back to mainland. Ticket counters were closed, they only open a few hours prior to a ferry departure. Besides, our plans for the next day were unclear as we had one more Jeju attraction on our list, a hike up the volcanic mountain of Hallasan. We continued through city streets to the central bus station for bus schedules to the base of Hallasan. Hoping to get on the very first bus the next morning, we found a motel close to the bus terminal.

We rose early, packed the saddle bags and were on the first bus to be at the trail head at 8am. The paths were well maintained and except for a few steep parts, the hike was an easy one. We hiked up to Nambyeok Junction (남벽 분기점) and marked the event with a short break and photos. As we hiked back a steady stream of hikers were still on the way up. We were at the trail head to catch the 1:30pm bus back to the city. We walked two blocks to the motel, collected our bags and bicycles. The harbor was 5km and we arrived well in time for the ferry back to Mokpo.

Jeju took my breath away. We plan to return, hopefully soon.