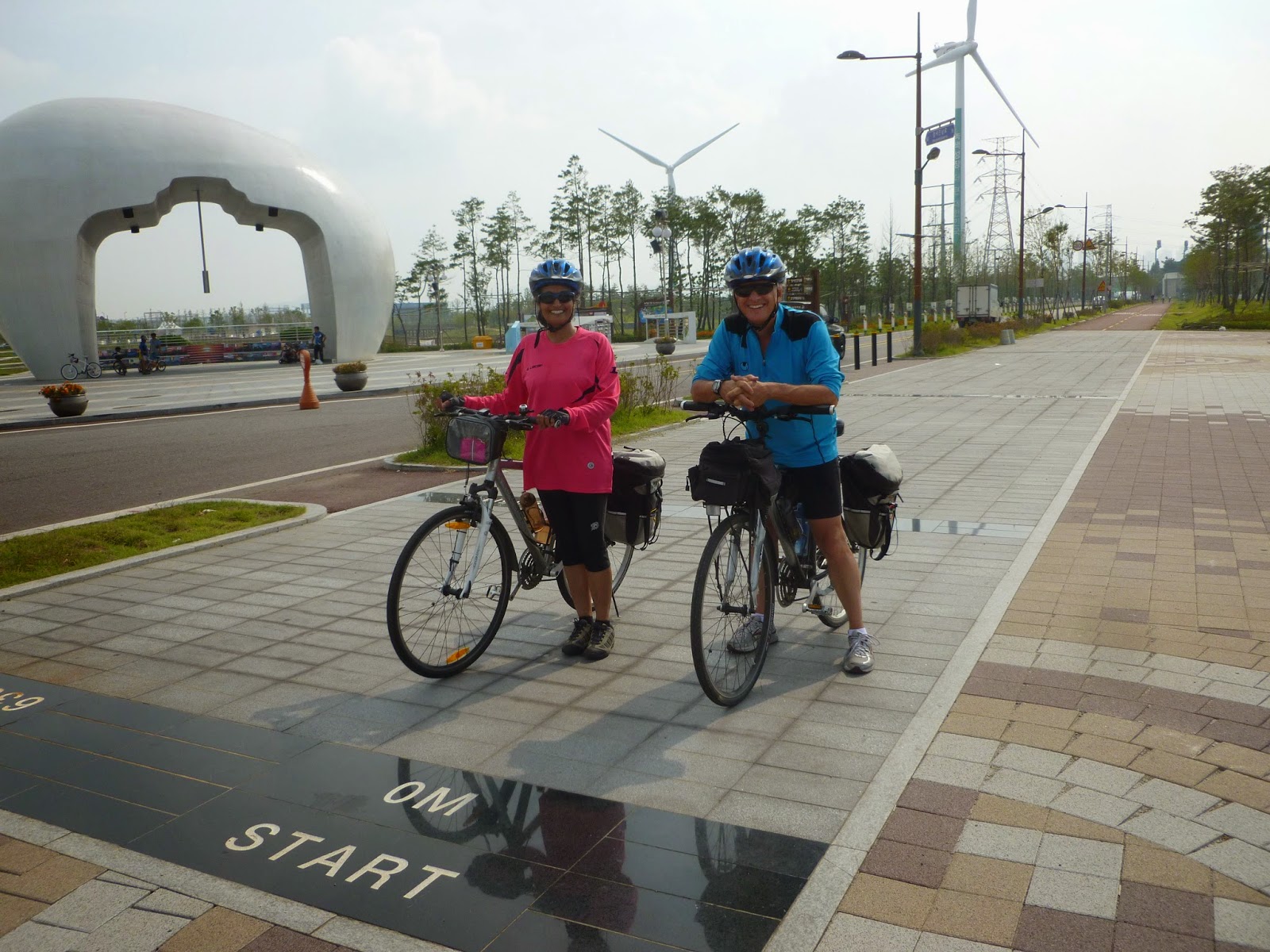 Incheon, with an open feel and ocean all around is as nice a place as any to start a tour. Along with the passport and the stamps, the fun continues with a '0M START' slab, a few meters away from first stamp station. The ride begins at the Ara sea lock along the Ara waterway for about 20km which then drops into Han river. Since our apartment is a slight detour from the route, we decided to make a day trip to Incheon. 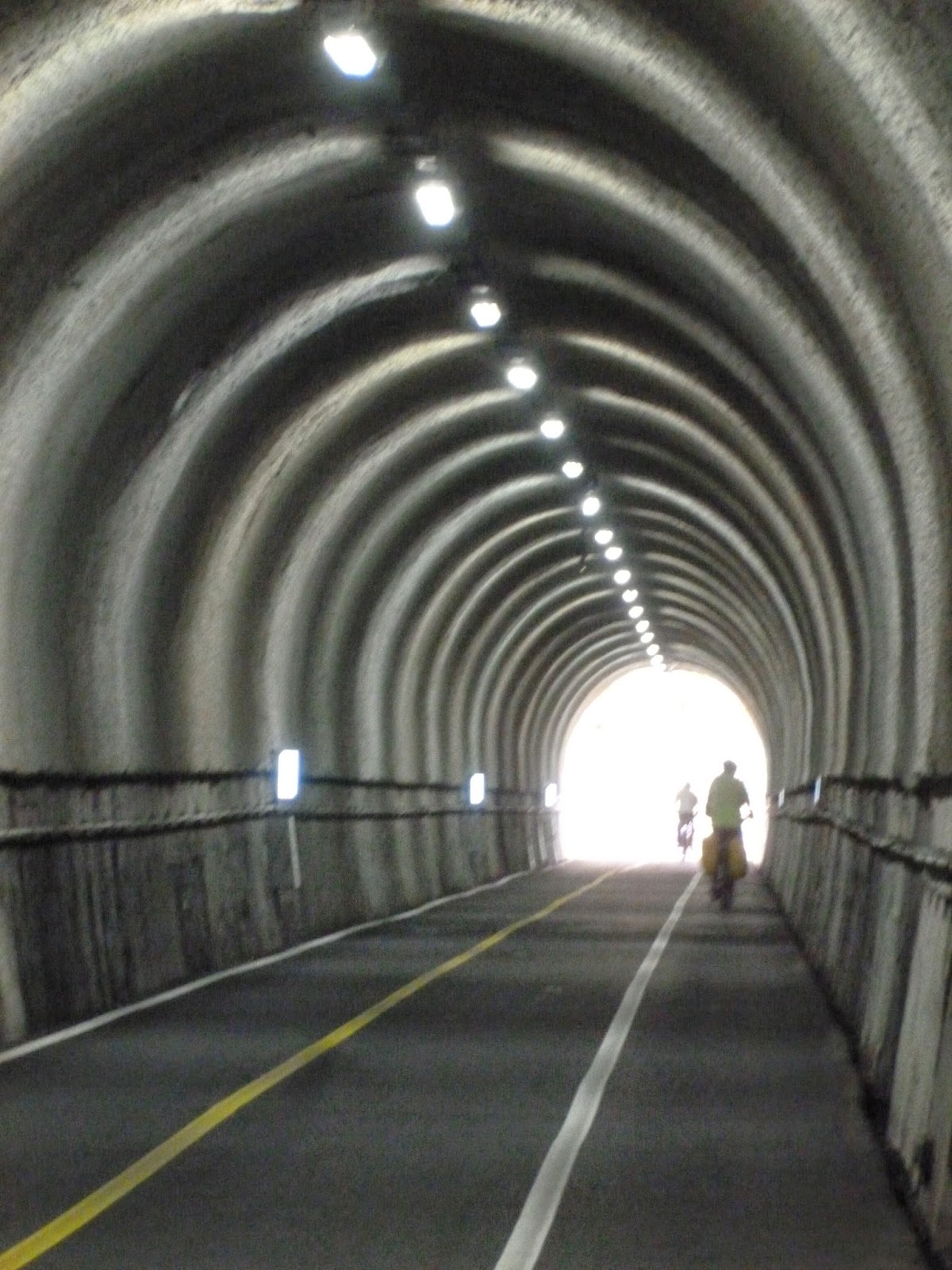 Beautiful weather continued and the cool temperature made riding comfortable. As is normal on weekends, we ran into hundreds of Korean cyclists. Only a half day out of Seoul, we got a taste of the scenery ahead of us. We cycled through many tunnels which were old converted railroads. In Yangpyeong we sought out the waterfront 'VIP hotel'. After showering we went in search of dinner and were surprised to see a Mexican restaurant. The meal was tasty but clearly the owners had never been to Mexico nor had eaten Mexican food!

We had rain off and on all day but the ride was still pleasant. Perhaps because of the rain, even though it was Sunday we had the trail all to ourselves. The iconic Ipobo weir was a nice distraction and we spent an hour riding back and forth on the bridge and taking umpteen photos. We detoured to the pretty island of Gangcheon.
Our overnight town Angseong is famous for natural hot springs. We checked into a mediocre hotel, strangely named 'UN Hotel'. Two cyclists told us they spent two nights at the hotel because they did not want to ride in the rain. Dinner was at a big, bright restaurant. The host explained all the items on the blackboard but the descriptions were lost on us. Noticing the blank look on our faces, she said, 'You'll have this.' Luckily the meal turned out to be very good.

Today was awesome and being Monday we had the trail all to ourselves again. Lunch was in a park in Chungju, on the road even 3-day old bread tastes good, especially with feta cheese and olives. We detoured to visit the Chungju dam, the Han river basin. The long, steep climb to the dam got us warmed up for the upcoming Saejae pass. 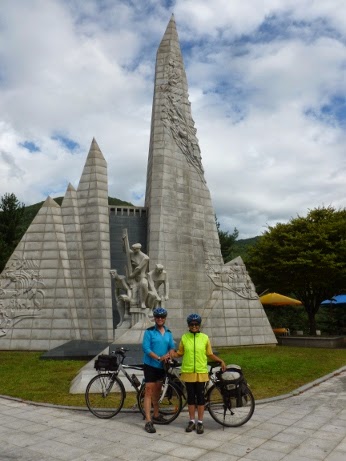 Next stop was Suanbo, a spa and ski resort town. We had been told that Suanbo was expensive but was quite reasonable on a weekday in the off-season. The big hotel in the centre of town cost $60. They had no special place for bicycles and parked them in the office area, right next to the hotel president's office! We decided to spend an extra day here, relaxed and enjoyed the sauna and natural hot springs.

Saejae pass at 548m was a breeze, training must have been good. The views were great all around. We stopped in a busy town of Mungyeong, the last accommodation option before the next big excursion. We checked into the 'C Motel', guess A and B were taken? The decor was amusing.

Walking around Mungyeong and trying 3 ATMs and failing, we were a bit panicky. Luckily the fourth one worked, KB* bank is a star in my book. Dinner was in a restaurant owned by an Argentinian-Korean couple, I got to practice Korean as well as Spanish. 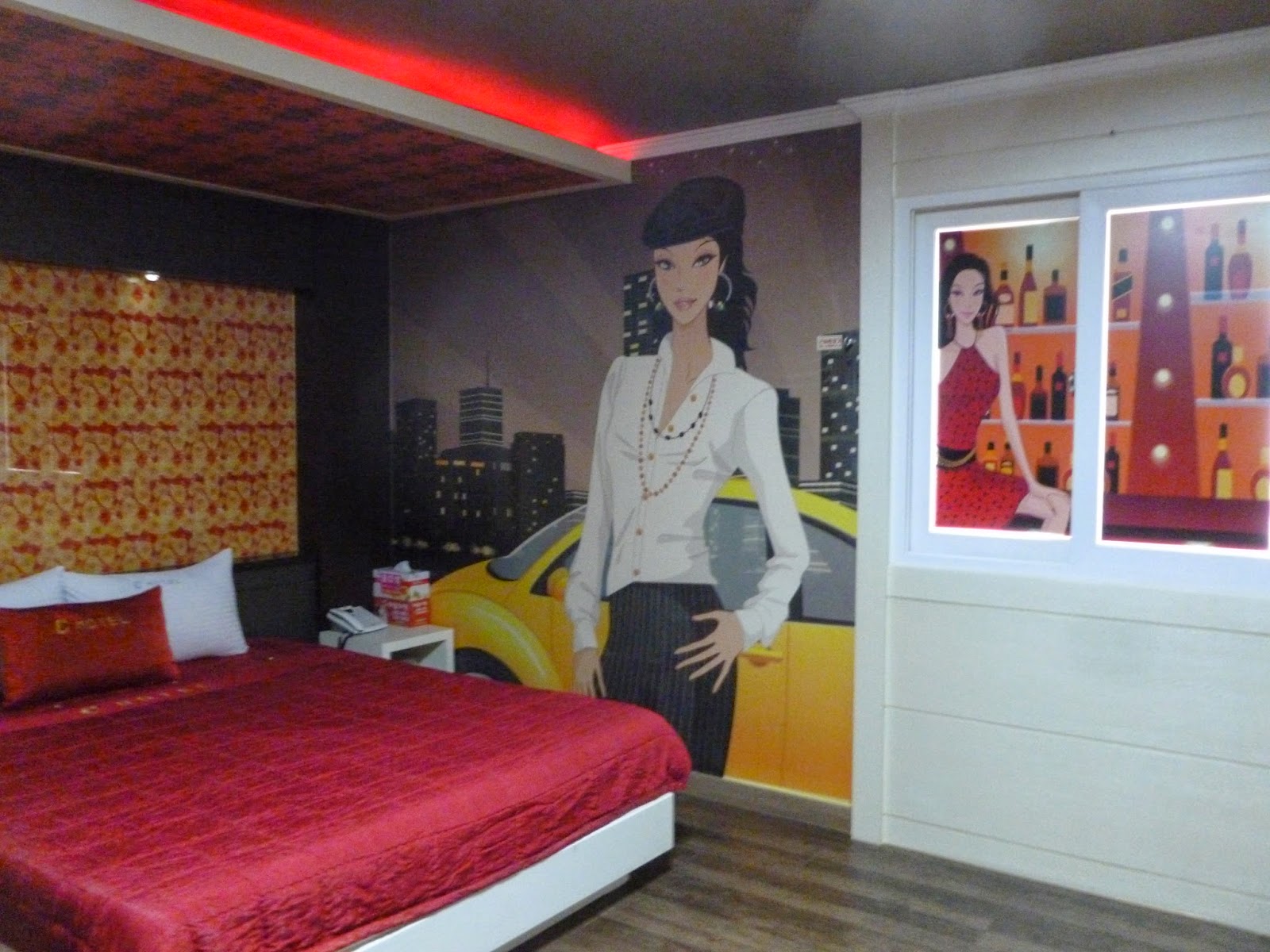 Andong is not part of the popular cross country route. We wanted to cycle to the source of each river and added the excursion. The detour was one day in each direction. The ride along Nakdong is among the most beautiful.

The 98km took us about 10 hours, including breaks. To add to the fatigue, the steepest hills were towards the end, on approach to Andong. Today was the day I was going to splurge on a 5-star hotel. Andong is a very pleasant town with a wide river, a man made beach and lots of touristy activities on the riverfront. Weaving back and forth on the small, pedestrian bridges, we arrived at the Andong bridge stamp station around 4pm. Heading back into the town, we began to look for a real hotel. We realized quickly that the town was host to a Mask festival. Every nice motel we checked was full. Such things have to happen once every trip at least. We decided to cycle some distance away from Andong and found a small hotel in the outskirts. The beautiful and spacious room would have put any 5 star accommodation to shame. Of course, after 10 minutes of being there with our drying laundry hanging all around, the place looked as though a tornado had ripped through it.

In anticipation of another long day, we left Andong at 7am, earliest departure so far. In stark contrast to the afternoon before, the valley was misty and foggy, typical for autumn mornings. By about 9 the fog had dissipated and the day would prove to be another spectacular one. 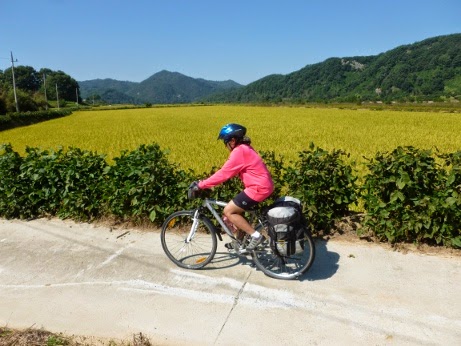 Just short of Sangju, the 'City of Bicycles', my front tire sprung a leak. Jerry fixed it quickly. We cycled past Sangju, passing up a visit to the bicycle museum. Nakdanbo seemed more like an intersection than a town but had many motels to offer. We picked Rex motel. The landlady plied us with fresh fruits and even did our laundry. For dinner we broke down and ate the Mountain House freeze dried spaghetti we had been carrying in our saddle bags.

The day was relatively short. Since the weekend was here again, the trails were busy and we got to chat with many cyclists, some also from Seoul. On this day we passed Gumi, a large industrial city. After checking into the hotel, we went in search of a bicycle shop to get Jerry's gear shifting problem resolved. The bike mechanics fixed it. We also bought an inner tube to replace the spare used the day before.

Light rain most of the day. There were steep and rough trails which we think were walking paths, now utilized to connect newly constructed bicycle trail segments. As if a reward for the toil, this path brought us to a beautiful and serene Buddhist temple complex. We spent a little time there enjoying the echoes of the mid-morning chants.
Today we had Jerry's rear derailleur cable breaking. Carrying spares as always, Jerry fixed it deftly. We spent the night in Motel Elegance. The name was a bit of an exaggeration but we had a place to stay, a hot shower and even a private bicycle shed.

The day started dry but as the morning wore on, rain picked up. At the Changnyeong stamp station, we received many bottles from K-Water, the Korean water management. We were also interviewed by a television crew, seeking our opinion on the bicycle trail system. The interviewer wasted no time making political statements denouncing the construction of so many dams.
As we got ready to leave, the K-Water officers warned us of typhoon Danas and that we should ride on the streets rather than the low lying bicycle trails which could be flooded. An hour later one of them drove his car and caught up to us. You must stop cycling and find a hotel, he told us, Danas' threat is serious. 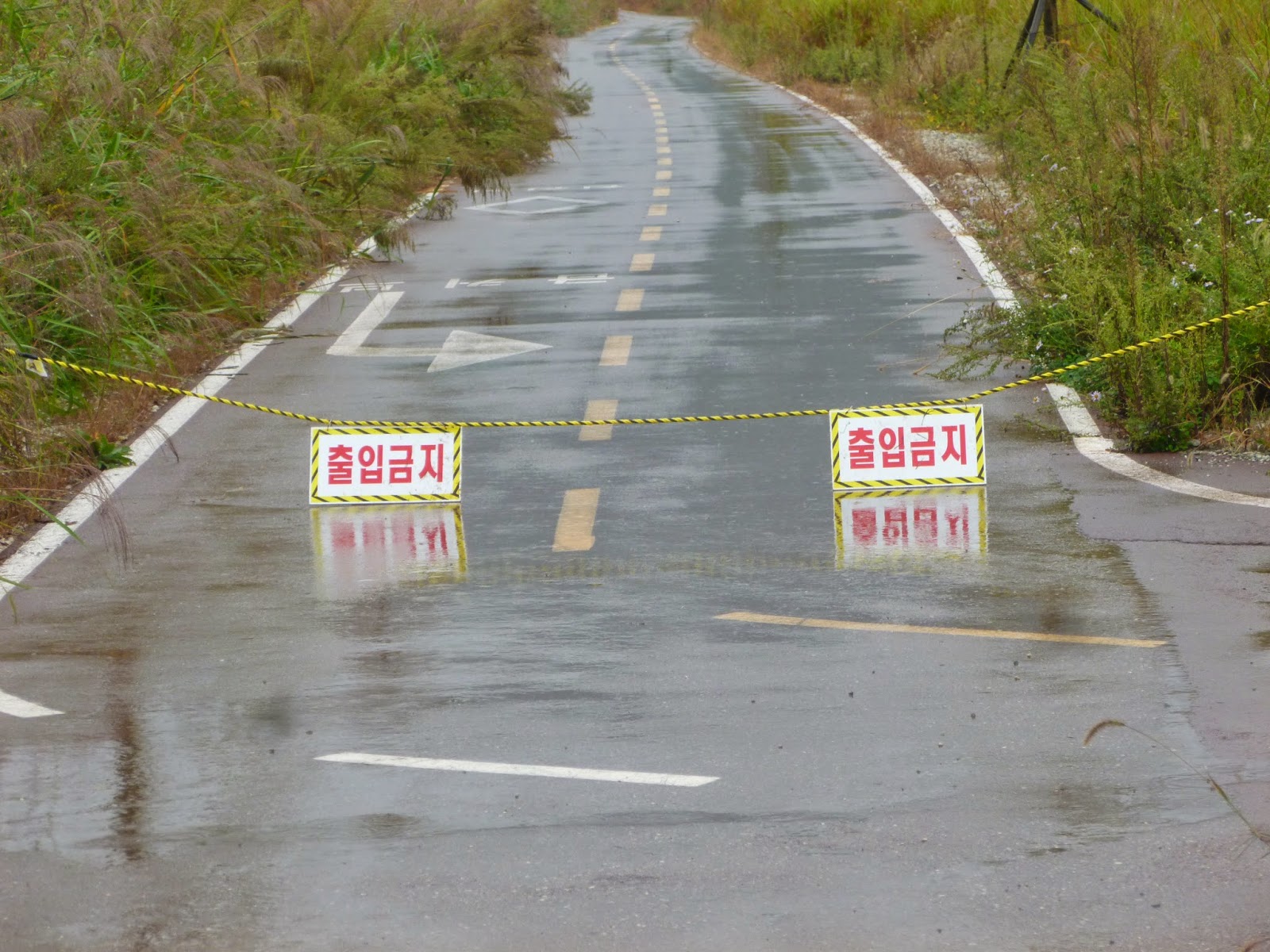 He took our mobile number and said he would keep us informed. We agreed to find a hotel and it another hour to reach the village of Hanam-eup. At this point, we were riding away from the trail and on the street. Not only was riding on puddles unpleasant, it was dangerous because of heavy rain and resulting low visibility. Our decision to quit was a good one.

The K-Water official sent us several text updates. The prospect of cycling the next day was not looking good. We resigned ourselves to spending an extra day at the hotel. In anticipation of the next day being a complete wash-out and our having to spend time indoors, we chose the motel's biggest room.

The next morning we loaded up the bicycles and were ready in case there was good news. Just as we were done strapping down the saddle bags, we received a text and a phone call giving us the green signal. Phew, that had been a close call!

After the drama of typhoon Danas, the day was bound to be easy. And it was. A short distance out of town, a campground with faucets became a handy bicycle washing station. A little further down the trail, the temple complex of  Gwangmyeongsa (광명사) loomed up ahead. Framed by mountains in the background, it was a stunning picture that made it to the banner of this page.

The spectacular scenery continued right up to last stamp station. The aproach to Busan was long but the excitement of nearing the goal had us peddling hard. Sealing the trip with the last set of stamps and 'final' photos, we went into the Four River Trail office. After turning in our bicycle passports and filling in contact information, we were told to wait a half hour to collect our passports. Little did we know that in a month we would receive a grand certificate and a medal etched with our names. 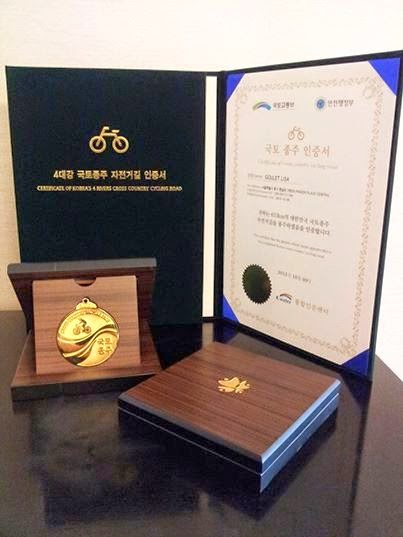 We cycled to the Busan train station and checked into a nice hotel in the next block. The return journey was not going to be by train as we assumed. Bicycles are not allowed on trains and we were directed to the bus station. The next morning we went to the bus terminal and after a 4 hour bus ride were home in time for dinner. 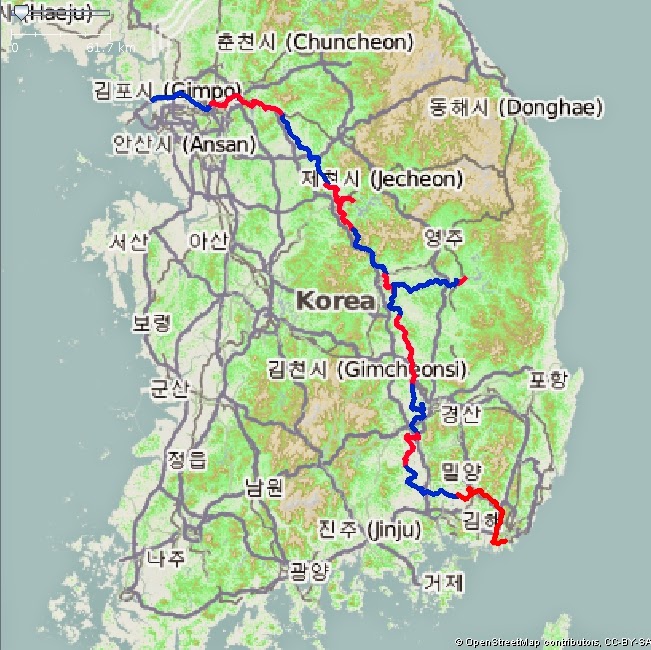